Rosie the Riveter is an iconic poster that represents a time when working women became visible in the collective U.S. consciousness in a way they had not been before. (Of course, women have always worked both inside and outside the home, but Rosie represents a moment when American society as a whole began to engage with that reality and with the reality that working women always have provided integral and essential services). 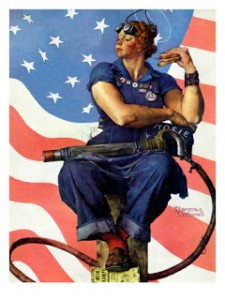 We love Rosie, and when we started thinking about the design for this site, we knew she would be a part of our creative process. We admire her toughness and all that she represents about the resiliency of the working woman in our country. But we also wanted to give our Rosie an update!

First, “feminism” has too long been associated with white, upper-class women of a certain generation.  We don’t live in a world that narrowly drawn, nor would we want to.  Instead, we agree that feminism is worthless without intersectionality and inclusion.  So we had our artist draw an arm for our Rosie that isn’t racially distinct (yet another benefit of pencil drawings!). We told our artist that Rosie had to be strong and she had to sport some serious nails.  No reason we can’t shatter the ceiling in style! Next, we wanted to literally arm Rosie with some of the strongest protections women have under the law.  Each of her tattoos invokes a civil rights statute that has been integral to making the U.S. a better and more equitable place for women.

There are, of course, many other important federal, state and local statutes on which women can rely.  We’d like to imagine that our tough-as-nails Rosie is emblazoned with those other statutes too — perhaps on her other sleeve?  It takes real courage to shatter the ceilings we encounter in our daily lives.  We hope that this blog can help all of you find and embrace that courage within yourselves.